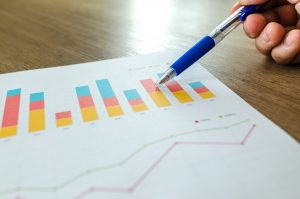 According to Holdbot’s findings, the correlation between coins in 2019 was lower than in 2018. It points out that its research should be taken with a grain of salt. Correlations can change. Additionally, correlation does not always point to causation, especially with limited data. The data (prices and global market cap) for the calculation was collected from Coin Market Cap.

In 2014,2015, and 2016 the correlation coefficient (which shows the strength of correlation) was not as high for the top 200 coins as in recent years.

The research identifies low correlation between coins such as BTC & Vechain and Ethereum Classic & NEM. It asserts that including assets with low or negative correlation in a portfolio can help to reduce overall variance and risk in the portfolio. However, many cryptocurrencies have not settled. The true nature of prices and even the reasons behind price changes vary.  Many coins are black holes for funding with no audit trails and a lot of false reports of their progress.

There does not appear to be enough data to conclude with 100% confidence about correlation of markets and the like. Regulatory and political pressure is likely to be one of the contributing factors to the demise of many entities. It’s too early to tell but if the tainted history of financial markets is anything to go by, a lot of coins will meet their ultimate demise. Even those with low correlation to the overall market. Behind the numbers, logos, and coins are factors which the majority do not see and will never see unless a leak or forced disclosure occurs. Nevertheless, Bitcoin is king. Ethereum is revolution.